CAD and image processing software tools play a key role in the RAS-assisted inspection loop and therefore their development is a main objective of ROBINS. The software is expected to:

The level of realism in the representation of inspected spaces is to be such as to allow the user feel a satisfactory degree of presence in the virtual space. The quality of 3D models and augmented VR models, and hence the quality of the user’s virtual inspection, is strictly related to the quality of visual data taken by the aerial drone and additional data coming from probes and sensors carried by the drone or by the crawler. Whereas the quality of data does not allow a satisfactory reconstruction of the 3D model, additional data and/or images should be collected.

The ROBINS project also aims at integrating image-processing algorithms specifically developed for the recognition of ship hull’s critical or suspect areas in the software dedicated to virtual tours, thus creating a unified environment for virtual inspection. Dedicated software tools and algorithms for image processing will enhance the possibility to effectively and easily identify critical or suspect areas in inspected spaces.
3D Reconstruction

3D reconstruction of real world objects has been an important research area for decades in computer vision as well as photogrammetric community. Accurate surface reconstruction has been established as a necessity for a variety of mapping, modelling, and monitoring applications (e.g. thickness measurement, cracks detection, coating condition assessment, evaluation of mechanical damages).

The most fundamental step required for surface reconstruction is generation of 3D point cloud. A point cloud is basically a large collection of points that are placed on a three-dimensional coordinate system. Two main methods of extracting point clouds exist: 3D scanning and photogrammetry. The 3D scanning techniques can be further subcategorized into laser scanning and structured light scanning. Spatial data is obtained by moving the laser head or the structured light cameras relative to the object being scanned to directly obtain point clouds of the object (or sections of the object if it is too large). With photogrammetry techniques, 3D point clouds are generated from a large set of images by matching 2D points and edges which are transformed in the 3D data by forward ray intersection. The following steps are required to extract point cloud data from a set of photos:

The resolution of 3D scanning techniques is generally higher than photogrammetry. However, the disadvantages of 3D scanning technologies are the higher cost of equipment, the generation of cloud point data that cannot be easily handled due to the huge number of points, a long processing time aligning point clouds and a higher expertise required to use scanning equipment. This makes photogrammetric systems efficient and feasible tools for the collection of required data for 3D surface reconstruction. Significant advancements in image processing techniques, together with progressive hardware developments (low-cost high-resolution digital cameras and multi-camera systems) have made modern photogrammetric systems very attractive. 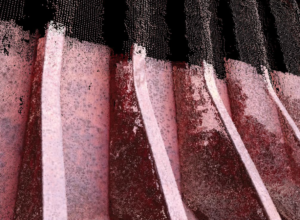 While point clouds can be directly rendered and inspected, usually point clouds themselves are not directly usable in most 3D applications, and therefore converted to polygon mesh or triangle mesh models, NURBS models, or even CAD models using surface reconstruction techniques. Different approaches to produce point clouds (e.g. laser scanning or photogrammetry) lead to variety of properties and imperfections that pose significant challenges for surface reconstruction methods. These properties distinguish the class of reconstruction methods existing today which range from methods assuming a well-sampled point cloud, generalize to arbitrary shapes, and produce a watertight surface mesh, to methods that make very loose assumptions on the quality of the point cloud, operate on specific classes of shapes, and output a non-mesh based shape representation. The methods available are based on explicit meshing (e.g. ball pivoting algorithm, Delaunay triangulation) and implicit reconstruction (such as Moving Least Squares (MLS), Radial Basis Functions (RBF), Poisson surface reconstruction). It should be noted that the scale of acquired data is quickly growing: software tools no longer deal with individual shapes, but with entire scenes, possibly at the scale of entire cities with many objects defined as structured shapes.
Recovering not just the geometry but also the structure of such large-scale scenes is a stimulating scientific challenge. Finally, there is a trend to replace the common on-disk paradigm by online algorithms performing reconstruction during acquisition. Recent works such as [14] demonstrate the practicality of building such online systems.

At the final stage, the reconstructed 3D model is textured by finding the best images for each triangle and adjusting colors. Since both 3D TIN model and the whole set of captured images are registered within the global coordinate system, creating texture map is essentially a problem of combination of texture fragments. Individual texture fragments are obtained by mapping (“backprojecting”) input images onto the generated 3D model. Multiple views produce multiple texture fragments, and the domains of these fragments are different parts of TIN model. It should be noted that overlapping fragments may differ photometrically due to different lighting, camera settings, or nonlambertian object surface (e.g. glass windows, water basins, or structures of polished metal) and geometrically due

to model imprecision and/or imperfect registration. Thus, texturing process should generate texture fragments very carefully in order to minimize visible seams, and also perform some post-processing in order to remove remaining photometrical differences between the fragments.

Summarizing, photogrammetry is a valuable and attractive approach in many applications which has the major advantage of being low-cost, portable, flexible and able to deliver, at the same time, highly detailed geometries and textures. At the same time, many objects are problematic for image-based 3D modeling techniques (unstructured, monochrome, translucent, reflective, and/or self-resembling surfaces). Moreover, additional constraints are related to lighting conditions which play a key role in production of high quality models. Problematic image capturing conditions result in a high level of noise in the final mesh models and more topological errors. Therefore, new improved and robust algorithms should be developed in order to deal with complex industrial sites.

The UIB team has been developing several methods for the detection of coating breakdown and corrosion (CBC) in images taken from vessels during inspection operations. The methods that have been developed are based on Deep Convolutional Neural Networks (DCNN), either for object detection or for image semantic segmentation. More precisely, three different approaches have been considered and developed: 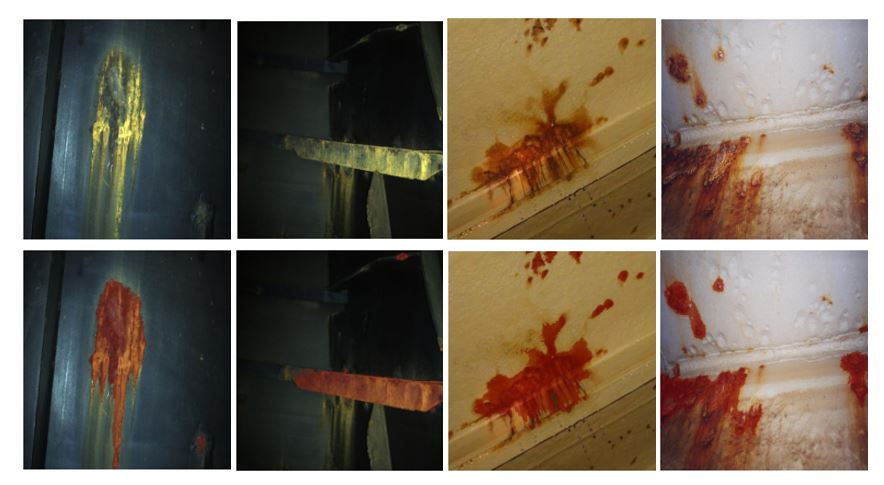 Automatic defect detection is a continuously advancing topic in research that lacks an effective market implementation in the case of shipping industry. Recently, there exists a boost for autonomous inspection of industrial, transport and building infrastructure through the synergy of robotics and computer vision. A first approach on rust detection on vessels has been developed within the MINOAS and INCASS frameworks.

The automation of corrosion and crack detection via non-contact and non-destructive techniques, instead of electrochemical methods, is an elaborate research problem. Typical methods perform image analysis on RGB data from metal surfaces. The various employed methods are mainly categorized in two groups; the ones based on an automated detection (e.g. on the wavelet domain, thresholding, spectral band combinations and analysis, image segmentation, boundary or shape analysis); and the methods based on image classification procedures.

ROBINS will promote the state-of-the-art in research and bring productive cutting-edge technologies closer to shipping market via the robotic integration of advanced defect detection and recording. Novel platforms of integrated lightweight sensors will be built, specifically oriented to defect detection. These platforms will take advantage of the modular structure of the proposed robots, aiming at adaptation on each case.

Simple image feature extraction may not be enough to detect damage in ship structure due to complex lighting conditions and great diversity of other conditions within data obtained from different robots. In this scenario, manual definition of features for defect representation is not feasible. Thus, digital image based defect detection should be built on a basis of highly robust machine-learning approach such as convolutional neural networks (CNN), which already showed good results in problem of object classification in photographs and looks promising for industrial inspection applications. In contrast to manually designed image processing solutions, deep CNN automatically generate powerful features by hierarchical learning strategies from massive amounts of training data with a minimum of human interaction or expert process knowledge. 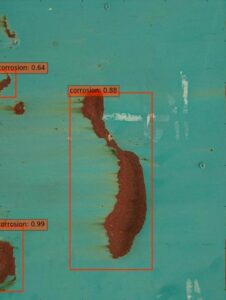 Development of deep learning-based approaches for corrosion detection by means of semantic segmentation.

The overall architecture of the ROBINS software is designed considering the use cases and workflow assumed for the inspection of the ship using RAS.
The major use cases identified as elements of the workflow are:

The ROBINS software is designed with a modular structure supporting different layouts of hardware, use cases, and user roles. It consists of:

The architecture of the ROBINS software assumes configuration where end-user applications and processing tools can be executed on different computers in the network (client-server approach).

The application has user interface tailored to processing the data collected during inspection of ships.

The structure of the data model is defined in an open way, relying on standard formats of files. Different data items are stored as separate files so that the data model remains accessible and usable even without the ROBINS software.
The data are organized by ship spaces assumed to be inspected separately (ship holds, compartments etc.), with the data relevant to each space being composed of:

Creation of the model starts from the data input by the user in the Authoring tool. Further a pipeline of processing tools is executed by the user on video or images, generating final data such as point clouds and textured meshes.
Processing tools are designed for execution on separate computer (server) or a cluster, with possibility to distribute the reconstruction tasks in parallel for efficient execution. ROBINS server component manages a queue of the processing tasks and distributes them among processing nodes automatically. The Authoring tool communicates with the server when necessary to submit a new task, query its status, or obtain results. 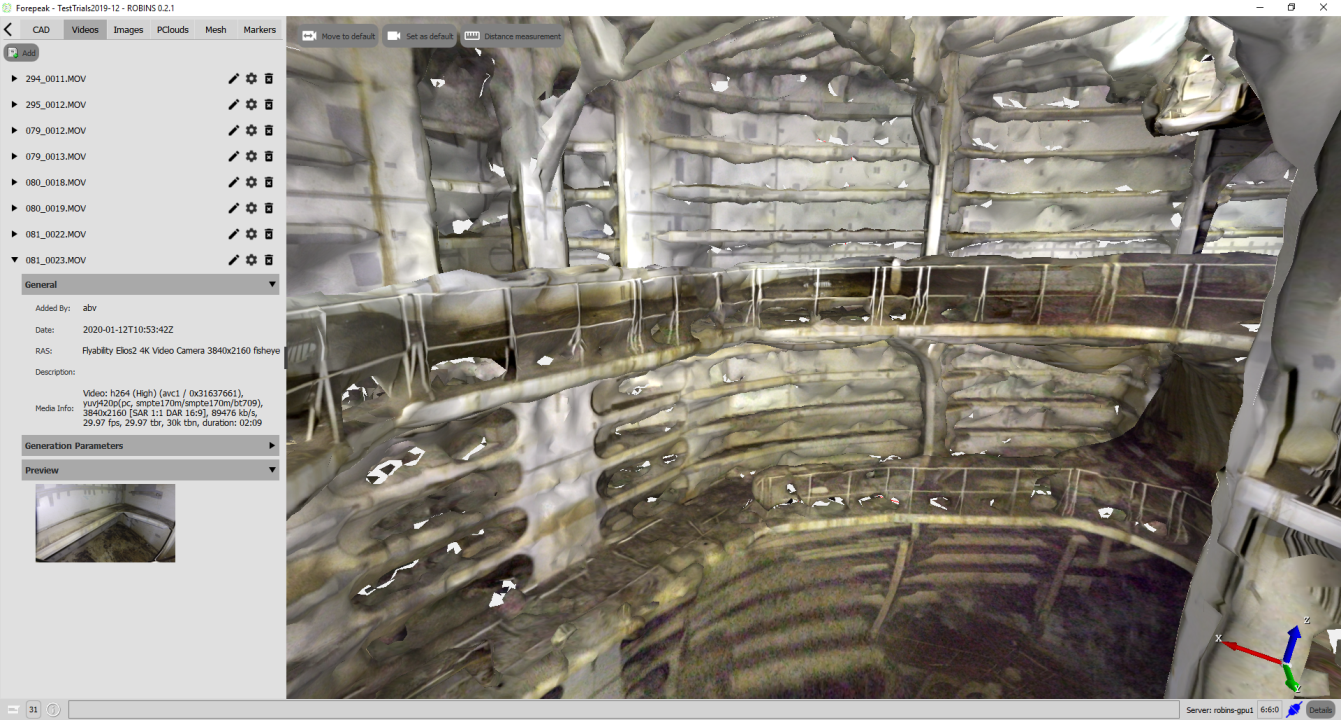 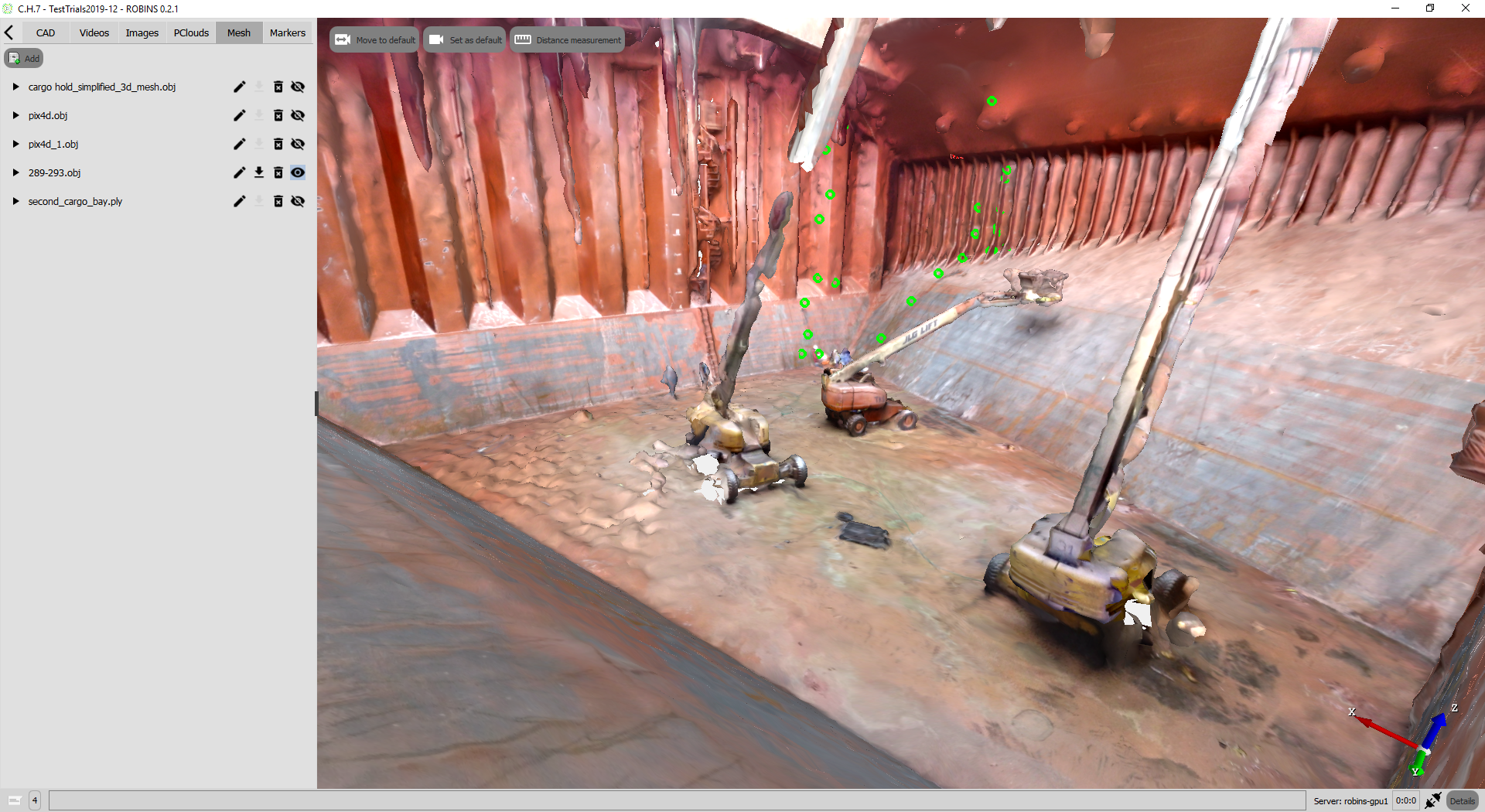 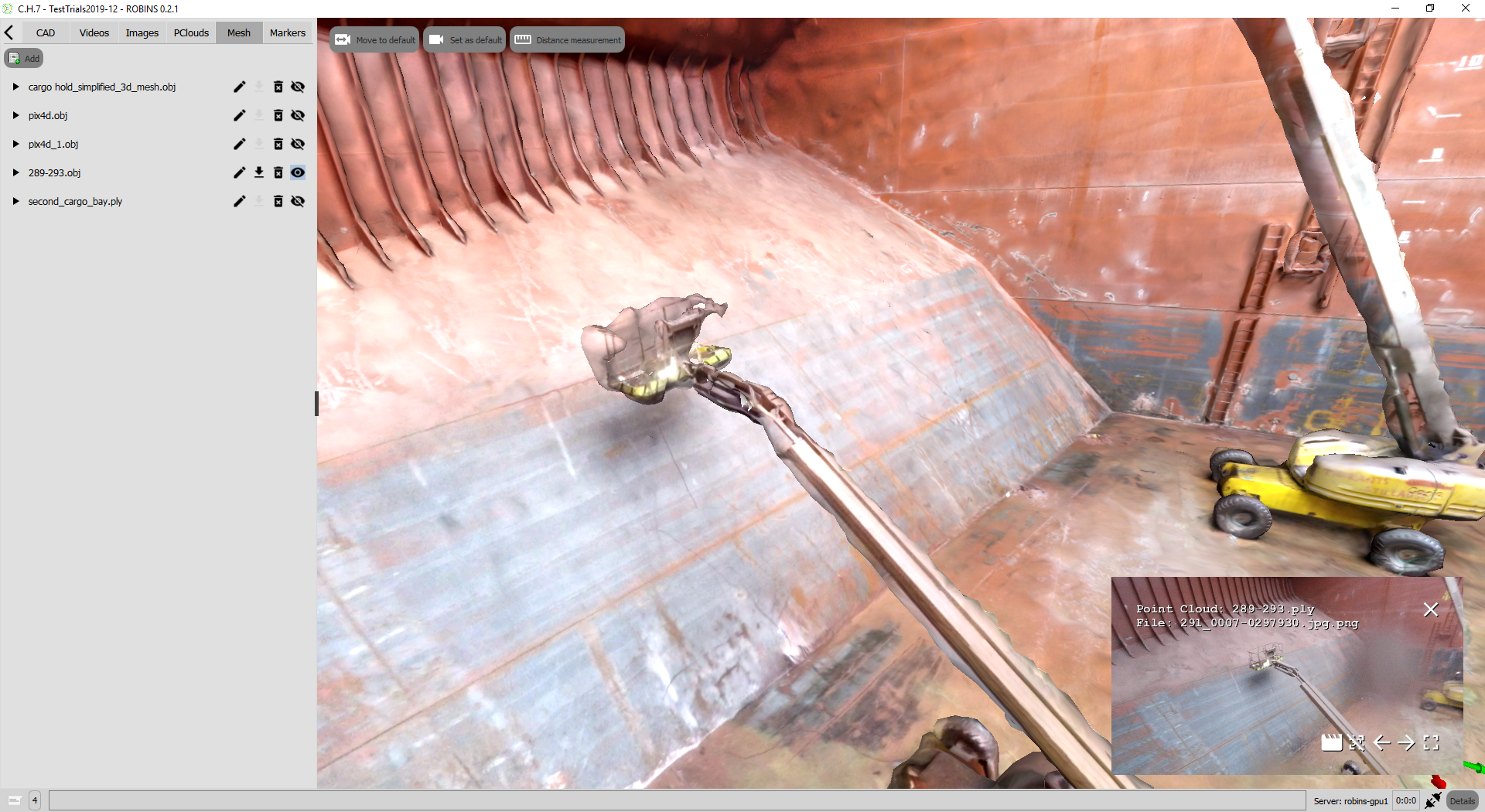