The crawler, developed by GE Inspection, is intended to be used for thickness measurements and other close-up investigations. 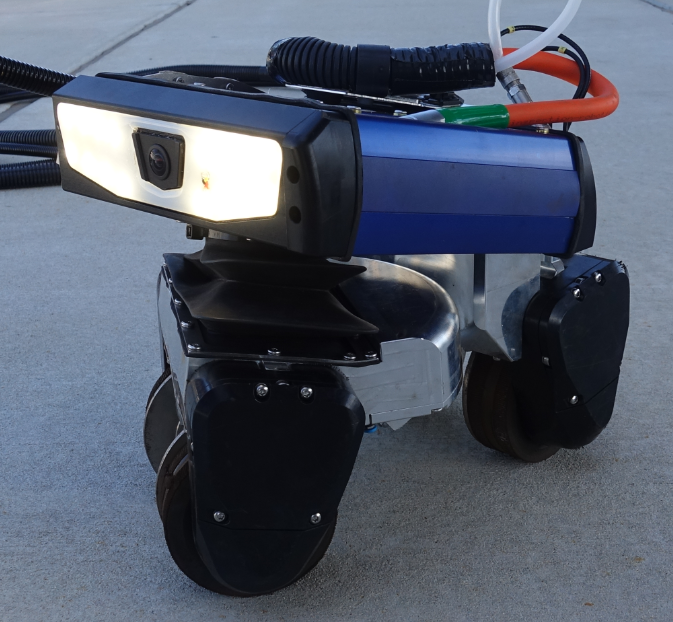 Robotic crawlers for inspection of vertical or even overhanging structures are both an active area of Research as well as a field of intense industrial development. As the typical structure in ships are made of (magnetic) carbon steel, magnetic adhesion is typically used for generating the positive contact force required to provide both adhesion and traction against gravity.

In this project, other adhesion principles such as vacuum or electrostatic adhesion are not considered. Magnetic crawlers typically run on magnetic wheels or tracks, providing both adhesion and propulsion. These wheels can easily deliver magnetic forces 2 to 5 times the weight of the robot, thus providing a reasonable
safety margin against detachment and finally falling, even under sub-optimum surface conditions, such as paint and dirt layers or rust. Problematic is the quick contamination of the wheels/magnets w/ magnetic particle. Thus, the surfaces have to be sufficiently clean in order to guaranteed sufficient inspection time between cleaning procedures.

The main problem of crawlers based on magnetic wheels is the limited ability to pass non-flat obstacles. As soon as one (or more) wheel touch two surfaces, e.g. in 90° corners, tremendous forces are needed to free the wheel from the first surface and then move on.

Often the motor forces and/or the friction at the contact surface are not sufficient to escape this locked-in situation. Several approaches have been proposed to overcome this limit: multiple wheel configurations, moveable field magnets instead of magnetic wheels, active lifters, passive lifters.

For ship inspections, several crawlers have been developed to clean and inspect ship hulls. However, due to size and limited obstacle handing ability they are not suited to inspect other parts of the ship, such as structured cargo holds, stiffeners or (ballast) tanks. Additionally, they lack robustness and stability during handling such obstacles.

Due to the large magnetic forces (up to several kN), placing the robots on a magnetic structure and even more removing it can become a difficult and dangerous task. Dedicated placement tools or adjustable magnet positions are used to enable the operator user friendliness and safe handling.

It is industrial practice to manually control the robotic crawlers along the surface, thereby requiring fulltime, uninterrupted attention of a well-trained operator. Limited support for dedicated scenarios support comes from builtin sensors: inclinometers enable straight vertical motions and line-following sensors control the robot along a given feature, such as an edge, a weld or an artificially placed guidance structure.

Crucial for a commercially attractive robotic inspection of ships is the ability to reach remote, not directly accessible location, be it due to height or in confined spaces. On a technical level this requires a crawler that is able to handle at least 90° corners and edges (to traverse from one plate/all section to the next), preferably also 180° edges (for crossing stiffeners). A promising approach is the wheel-parallel-to-wheel approach, which is already working under lab conditions. In this project, the range (transitions angle, wall orientation, size) as well as the robustness against aggressive environments will be improved. This project shall adapt such mechanisms and integrate them into the BIKE robot.

For efficient operation and user acceptance the simplicity of handling and navigation of the inspection tool cannot be underestimated. ROBINS shall develop control strategies based on multiple sensor inputs to support the operator in reaching his/her inspection target quickly. The operator shall be able to concentrate fully on the very inspection task and must not be deviated by complicated steering a complex robot. We will address this gap using multiple sensors and appropriate control strategies. This can involve: odometry (1), inclination sensors and gyros (2), cameras (3) edge detection (4), distance sensors (5) and information from outside such as from the flying platform (6) or a fixed base station (7).

For remote UT inspection, the UT probe has to be brought to the inspection location by a manipulator and then be put in close contact w/ the test object. This is solved for access path free of obstacles by sliding the probe on the surface or simple lifters from the launching point to the inspection position. However, such standard probe systems prevent passing obstacles – such as 90° corners – along the access path. Additionally, they are not flexible enough to position the probe at some critical locations, such as welds. In ROBINS, an articulated probe handling tool shall be developed and integrated to both position the probes flexibly as well as to move it out of collision situations.

In remote inspection, the probe is far away from the operator controlling the data acquisition. The data quality (electrical noise) and the need to feed couplant liquid to the probe contact limits this distance or impairs signal quality. We shall develop or adapt and then integrate a miniaturized UT control system and couplant feed system has to be integrated on-board the robot.

The existing platform was to be extended while maintaining the capabilities of the original system. The chosen design was a second layer of waterproof housing on top of the existing shell. This approach allowed for seamless and protected integration of an on-board computer, a ultrasound testing device (UT) depth cameras, safety sensors and a scanning LIDAR. 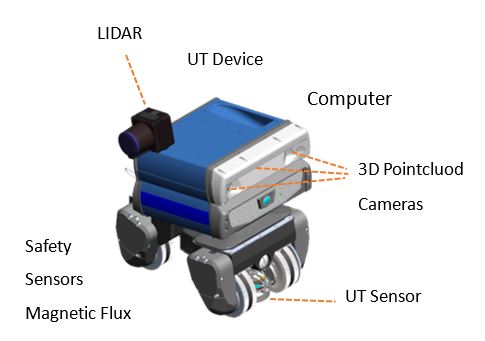 Global localization of the robot within the environment of a cargo hold is required in order to report any measurements in a structured form. The location of the measurement needs to be reported with respect to some agreed coordinate system. Additionally the state of the robot (robot position, sensor position, actuator state and off course the thickness reading should be recorded and reported in a consistent way.

In order to achieve the global localization, a system was developed which allows for deriving the robot position from a sensor fusion of a scanning LIDAR sensor, IMU data and wheel odometry. The system makes use of a Monte Carlo filter, also known as a Particle Filter in a combination with a Kalman Filter in order to obtain the most likely position for a robot in a given environment model with current and past sensor input. For this to work, the environment should be modeled with 3D surfaces prior to the robotic deployment. 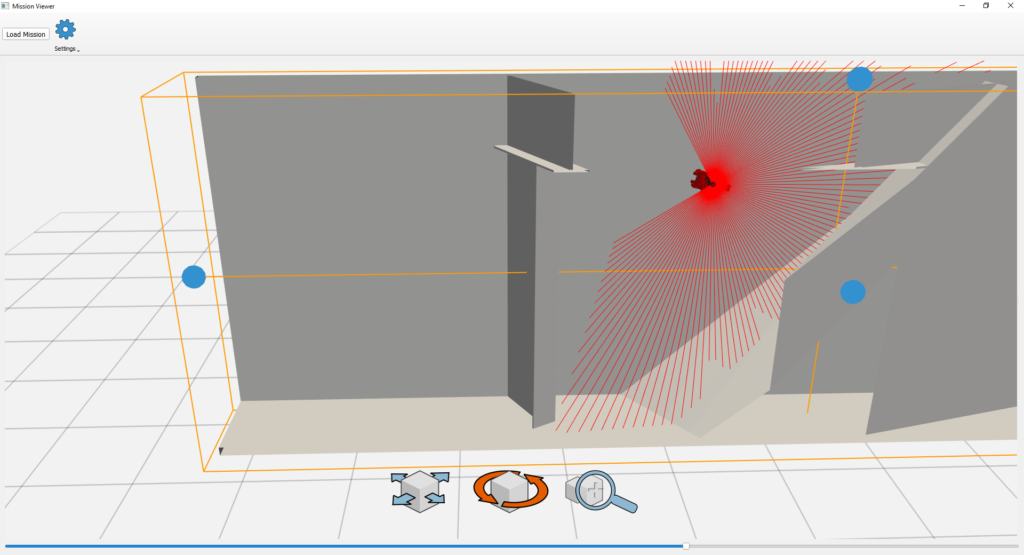 Figure 2: Global Localization of the Robot within a 3d surface model of a ballast-tank. The red lines represent the evaluated scan lines of the LIDAR sensor. 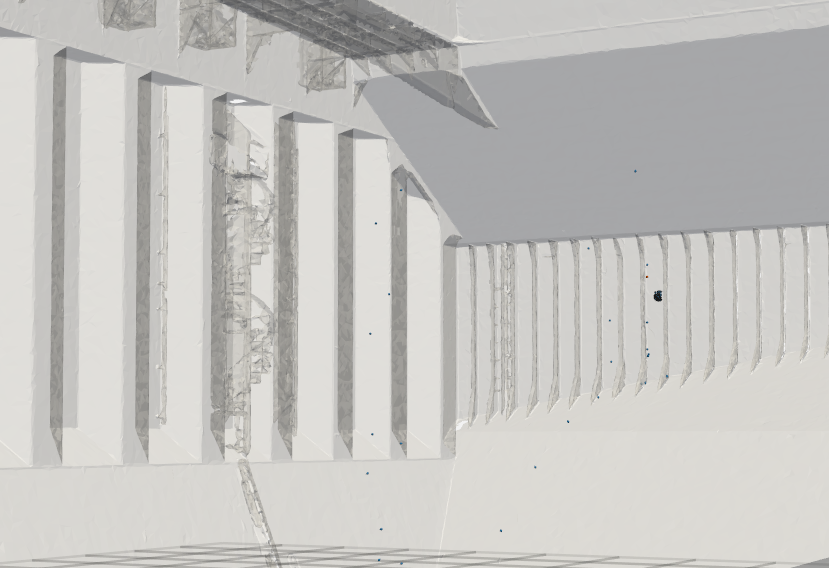 Figure 3: Robot Localization inside a Cargo Hold of a Bulk Carrier. The dots represent locations where thickness readings were performed.

In order to approve operator feedback and to allow for semi-autonomous and autonomous behaviors, it was essential to implement improved three-dimensional perception capabilities on the robotic platform.

The installed array of three depth cameras (one to observe the surface on which the robot is driving, directly in the front and two for looking forward and to the sides), was first tested on a prototype inside a ballasts tank. 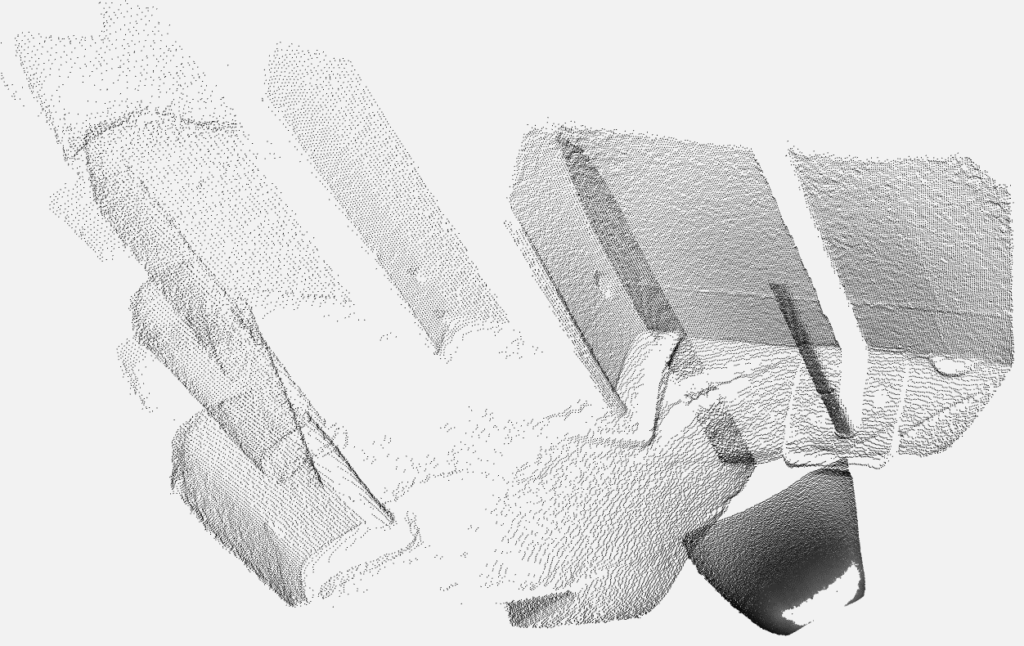 Figure 4: Point Cloud from front mounted depth cameras as presented to the operator during the first tests.

After bringing together the point cloud from the depth cameras with the global localization system, the operator is now presented with an overlay of three-dimensional spatial awareness. The global localization system provides feedback about the position, orientation and state of the robot. The depth cameras aggregate their information into a pointcloud overlay to confirm that the maneuver space is indeed free of obstacles and that the dimensions of the environment model actually match the reality. 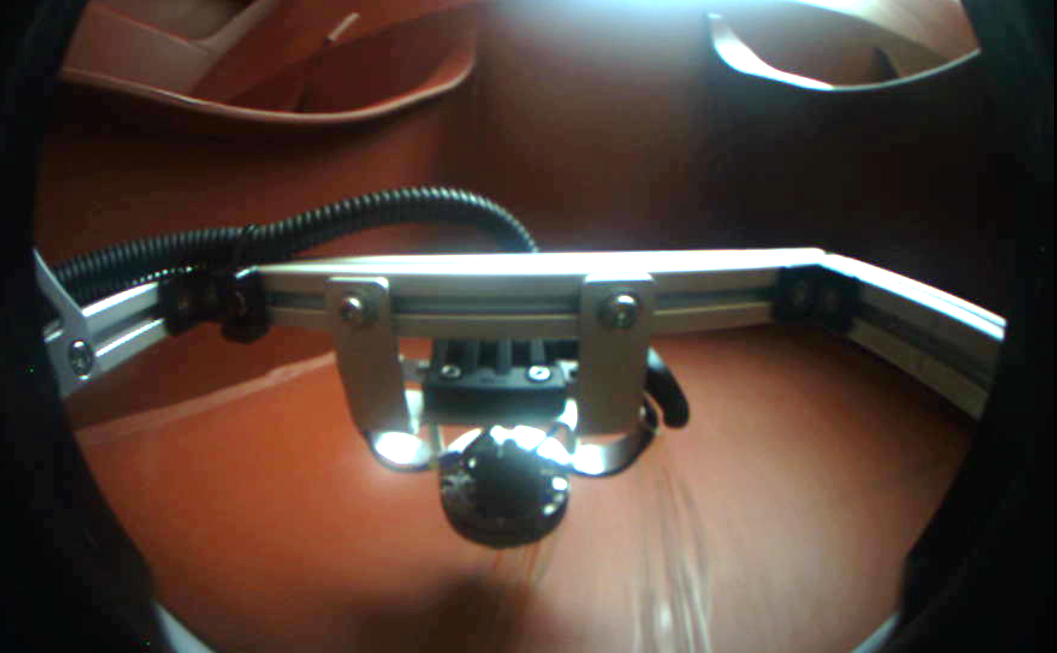 Figure 5.a: View of the same robot from onboard camera 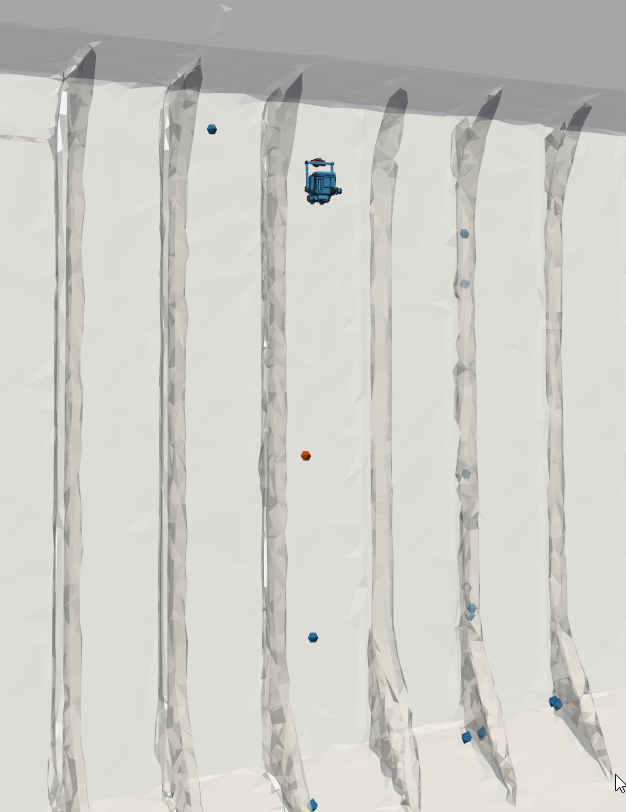 Figure 5.b: View of the same robot from global localization system 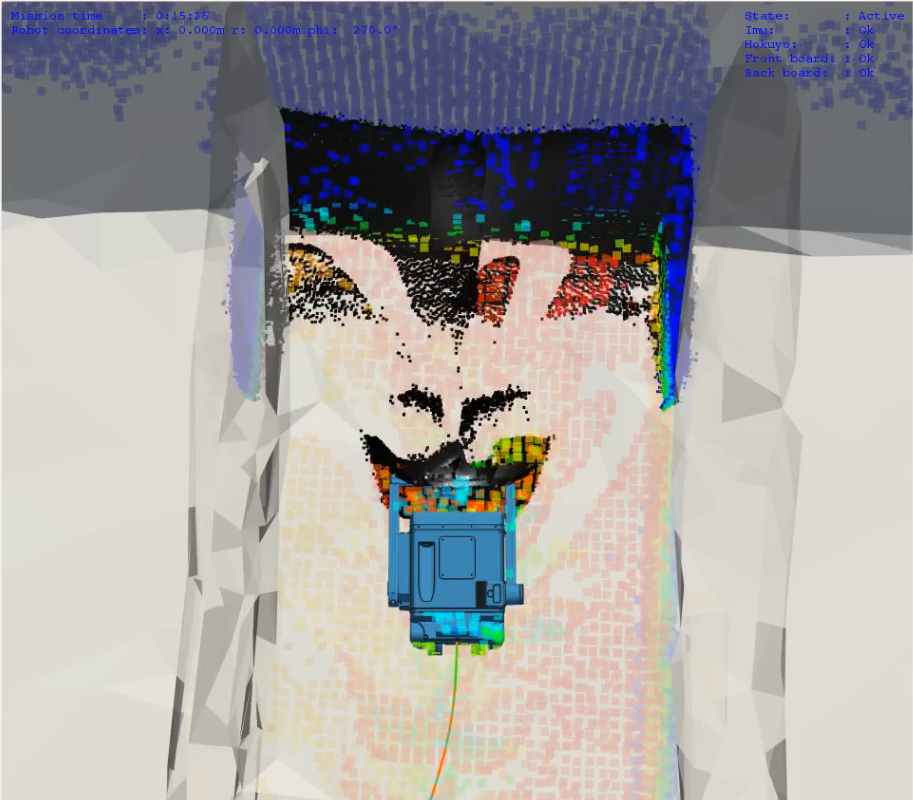 Figure 5.c: View of the same robot from with the Depth Camera pointcloud overlay

First field tests showed that the position of the UT sensor between the front-wheels of the robot, though perfect for sensor protection and reliable measurements, was not optimal for the use-case of ship inspection. It was decided to add an actuator to the system to allow for more sensor positioning flexibility. The difficulty with the probe mounted on an actuator arm was that a new probe-holder had to be developed and designed. 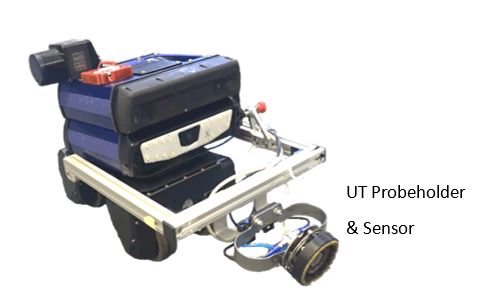 Figure 6: BIKE platform with ROBINS extensions and UT probe-holder on an actuator

Current State and next Steps

The current level of software integration allows for global and local state awareness in a single user interface, including measurement options and data capturing methods.

All captured data is stored with the entire mission environment, the robot-path and -state into a consistent and reliable database.

The robotic thickness measurement system was successfully tested inside a cargo hold of a bulk carrier.

The main findings from the test were that the position of the probe head was not actuated with enough degrees of freedom in order to reach all the points of interest on the stiffener structures. In the tested system there was still manual work needed to retrieve the reading value from the ultrasound signal. Evaluation gates need to be adjusted and the final reading needs to be entered by the operator.

The next phase of design changes will therefore focus on improving the agility of the probe holder and aim at further integration of thickness readings into the control and capture software.